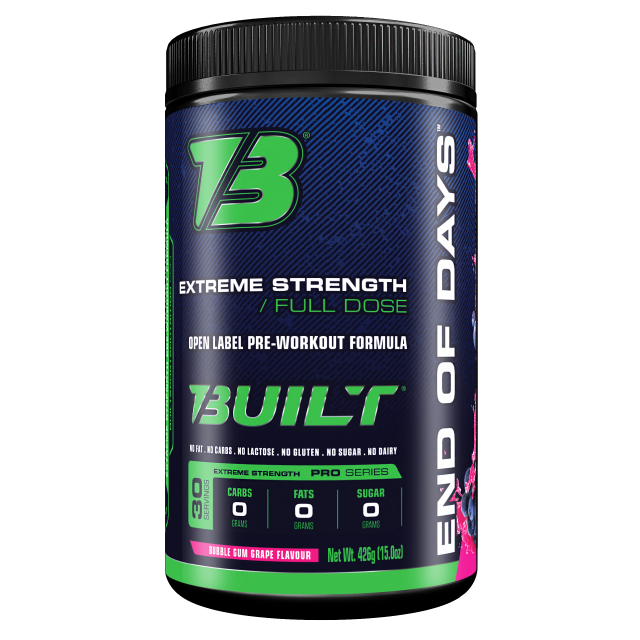 FULLY DOSED It is a fully dosed, high strength pre-workout with clinical dosages of all ingredients

IT DOES NOT HAVE

Has a pre-workout ever existed which contains every possible ingredient to maximise your training and the results from it?

Caffeine Anhydrous - 350mg which is fast acting to hit your system incredibly quickly and quickly get you into the training zone.

Guarana Extract - 50mg of which enters your system at a slower rate and will keep you going until the end of your workout.

Juniper Extract – 10mg which acts as a clean energy source. It is also known to decrease water weight. It provides a smooth energy curve when paired with caffeine (extends the half-life. It will also assists with mood elevation for the ultimate workout!

Theobromine - 100mg of which is a bitter alkaloid of the cacao plant, It is found in chocolate, as well as the leaves of the tea plant, and the kola nut. It is classified as a xanthine alkaloid, which also includes the similar compounds theophylline and caffeine.   Theobroma, the name of the genus of the cacao tree, has the meaning "food of the gods with the suffix -in given to alkaloids and other basic nitrogen-containing compounds

Teacrine- which is a specialised version of Theacrine works similarly to caffeine helping to reduce fatigue, significantly enhance energy and physical performance while decreasing anxiousness. Theacrine works with the body’s natural metabolic processes to deliver longer lasting energy, increased mental clarity and improved mood and motivation. It can also significantly enhance energy and performance without the harsh ‘crash’ or build-up of tolerance and desensitization over time. It is exceptionally complimentary to any pre-workout formula and can be used in combination with a number of performance-related ingredient

L-Citrulline - 6,000 mg – The complete dose!  The organic compound citrulline is an α-amino acid. Its name is derived from Citrullus, the Latin word for watermelon

Agmatine Sulfate - A full 1,000 mg of to create muscle pumps.  More importantly this increase the transport of oxygen to your muscle cells to increase muscle growth and shuttle all of the other nutrients to your system

Taurine - 500mg which has benefits of cardiovascular function, working as an antioxidant and most critically helping stimulate the muscles to offer better performance for athlete

Higenamine HCL – 65mg – Developed for weight management and had been demonstrated to be a B2 adrenoceptor agonist.  This boosts the cellular concentrations of the adrenergic second messenger, cAMP leading to vasodilation and arterial integrity.

Creatine HCL - An astonishing 2000mg of which is the most expensive  and effective format of creatine to use in a pre-workout.  No detail has been skimped on. This leads to extra strength and the critical increase in recovery time between training sets.

Beta Alanine -2,000 mg of for strength and endurance during your training session.

Definitely has everything you need in it.