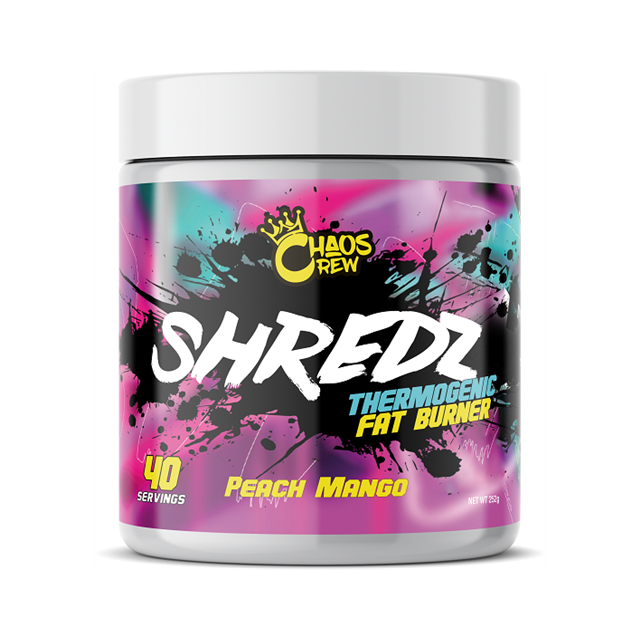 Chaos Crew Shredz contains:
Taurine
The health benefits of taurine are far reaching but we have included it mainly for its endurance and fat burning benefits. Many studies and literature show taurines ability to burn fat both solo and with other natural ingredients. One study using 3 grams per day for 7 weeks reduced body weight significantly in a group of overweight adults. Additionally, supplementing has been found to reduce inflammation and artery thickening. When combined, these effects may drastically reduce your risk of heart disease

Choline Bitartrate
Choline is an essential nutrient required for the daily bodily functions and overall health. Choline aids in decreasing cholesterol from your system, predominantly the liver area. Choline's efficient metabolism of fats has also been linked to a greater level of satiety, which, in turn, leads to a decreased consumption of calories, resulting in overall weight loss. Furthermore, the body uses Choline in order to produce acetylcholine, an important type of neurotransmitter, involved in memory and focus.

Lotus Extract
Many health benefits have long been attributed to the sacred lotus leaf of the Far East. However medical studies have confirmed how this natural plant has outstanding weight loss attributes as well. A study by Inha University, Korea confirmed that lotus leaf slowed the absorption of fat and carbohydrates, increased energy expenditures and rapidly increased lipid metabolism. The study also confirmed that lotus leaf significantly reduced the increase of weight in those tested. Another benefit is it is a natural mood enhancer and has a relaxing effect on body and mind.

Rosehips Extract
Recent studies show daily intake of rosehip extract decreases abdominal visceral fat in pre obese subjects in a randomized, double-blind, placebo-controlled clinical trial. The scientists found that the rosehip group demonstrated significant weight loss when compared to the control group. Furthermore, the evidence suggests that much of this weight loss was as a result of fat burning. Overall body fat fell during the trial, but was particularly pronounced in the abdominal region.

Organic Apple Cider Vinegar
Studies have shown it can help reduce food cravings and help keep you fuller for longer, meaning you are less likely to snack or overeat. It has a lot to do with its balancing of blood sugar and insulin sensitivity as insulin. Keep your insulin balanced and you are less likely to lay down more fat. Studies have shown it can reduce blood sugar by around 30% (one study showed a eduction of 34% when eating 50g of white bread).  It also reduces fasting blood sugar by around 4%.

Pro GBB - or Gamma-Butyrobetaine ethyl ester HCl
Is the molecule that your body converts into L-Carnitine when naturally producing its own carnitine. Studies show that its supplementation can increase the body’s plasma L-Carnitine levels by nearly double! The benefits of GBB are similar to the benefits of carnitine supplementation. It has also shown to be a serious thermogenic so you can expect some extreme fat burning!

Chromium
This is a mineral that enhances insulin, a hormone that's important for turning food into energy. Your body also needs it to store carbohydrates, fats, and proteins. What's more, it may help reduce hunger, cravings and binge eating.

Selenium
This mineral holds the key to maintaining proper thyroid health. Why is that important, you may ask? It’s because your thyroid is small gland in your neck that secretes hormones that control major bodily functions, including how you digest food, use energy, and even the efficiency of your metabolism. Selenium not only acts as the “on” switch to proper thyroid function, but it also helps protect the gland from inflammatory byproducts of thyroid hormone production. Many people who have a sluggish thyroid exhibit deficiencies in selenium along with a slowed metabolism and weight gain. Luckily, studies show that supplementation of 80 micrograms per day—about what you’ll find in 1 scoop of Shredz helps to reduce anti-thyroid antibodies.

L Theanine
This increases the release of gamma-aminobutyric acid (GABA) – a chemical known for its ability to promote relaxation, calm and inhibit central nervous system activity. That means that using L-theanine into your fat-burning stack has a calming and relaxing effect, but also promotes focus, attention and memory too. 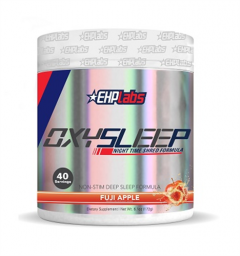 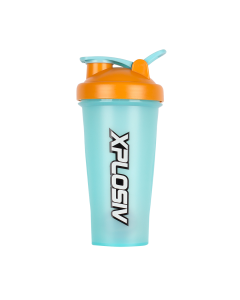