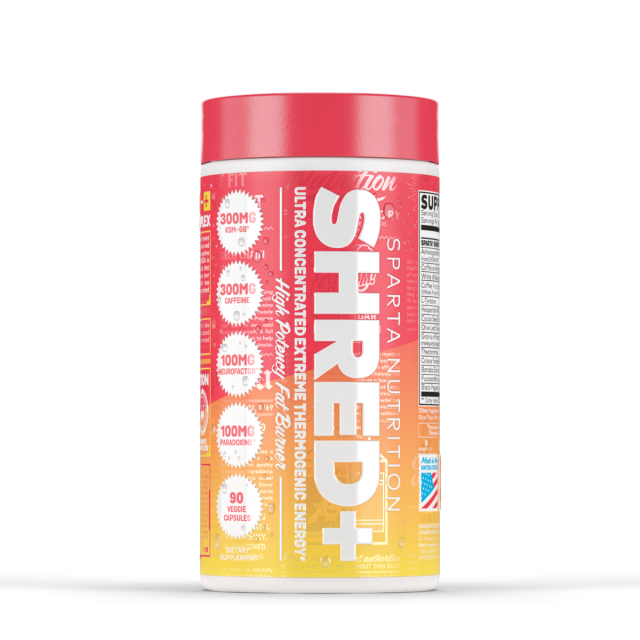 Not all fat burners are made equally. Shred+ contains a unique combination of metabolism-boosting nutrients to increase energy, reduce appetite, boost energy expenditure, and combat feelings of poor mood commonly experienced when dieting.

We make sure Shred+ is clearly labeled with everything that goes into our formula. No
surprises. Zero proprietary blends. No banned substances. With Shred+, all active ingredients are transparently dosed so that you know exactly what you’re getting per serving.

Our approach was to create the most effective fat burner, starting with premium ingredients that stand up to the test. To help keep you on track, we’ve included a synergistic combo of energy enhancers and adaptogens to increase energy, mood, and motivation, to keep you fueled all day long.

What’s in Sparta Nutrition Shred+? Let’s take a look at the key ingredients (per 2 scoops)*.

KSM-66® (300mg)
● KSM-66® is an ultra-premium form of ashwagandha extract standardized to 5%
withanolides backed by over 20 clinical studies*
● Ashwagandha has been traditionally used as an adaptogen to help reduce cortisol
(the “stress” hormone) and improve the body’s response to assorted stressors.*
● In case you weren’t aware, dieting can be extremely stressful to both the body and
mind. Studies using KSM-66® find that it may help reduce stress and support weight loss
management.*

White Willow Bark (125mg)
● Willow bark has been used for centuries for pain relief, due to the presence of
salicin.*
● Salicin is metabolized into salicylic acid in the body, which serves as a natural anti-
inflammatory and pain relief agent, painkiller, and blood thinner.*
● Salicylic acid has been noted to inhibit the production of molecules known as
prostaglandins, which can blunt the effects of fat-burning compounds.*

NeuroFactor™ (100mg)
● NeuroFactor is a trademarked blend of polyphenols derived from coffee fruit that
have been shown in research to stimulate the production of Brain-Derived Neurotrophic
Factor (BDNF).*
● BDNF is a neuropeptide known to play a key role in brain health as it affects
neuronal development, maintenance, and repair.*
● BDNF also helps offer protection against neuro-degeneration.*

L-Tyrosine (100mg)
● Tyrosine is an amino acid naturally produced in the body (as well as obtained from
the diet) used in the synthesis of dopamine (the “reward” molecule) as well as the fat-
burning catecholamines epinephrine (adrenaline) and norepinephrine
(noradrenaline).*
● Increased levels of dopamine support mood and motivation––two qualities which
decline the longer an individual diets.*
● Tyrosine also has been found to help reduce stress and improve performance during
physically and cognitively demanding tasks.*

Theobromine (50mg)
● Theobromine is a “feel good” compound naturally occurring in dark chocolate that
is commonly used as a vasodilator and bronchodilator.*
● It has been found to inhibit phosphodiesterase (PDE) enzymes and up-regulate the
activity of the intracellular messenger cAMP.*
● cAMP an enzyme called PKA, which reduces inflammation and causes
vasodilation*
● Theobromine also antagonizes adenosine receptors (similar to how caffeine works)
which helps increase mental energy, focus, and mood.*
● Recent studies find that theobromine may help “brown” white adipocytes via β-
adrenergic signaling and AMPK activation, which stimulates thermogenesis.*

Coleus Forskohlii (50mg)
● Coleus forskohlii is an Ayurvedic plant history used to support weight loss, decrease
inflammation and promote male hormone health.*
● The primary bioactive compound in Coleus (Forskolin) has been documented in
research to increase cAMP levels, which are associated with greater fat loss.*
● Forskolin has also been noted to stimulate lipolysis (the release of stored fat from
adipocytes), which encourages fat loss.*

BioPerine® (10mg)
● BioPerine is a patented black pepper extract standardized to 95% piperine.*
● Piperine has been shown to improve absorption and bioavailability of various
nutrients.*
● Additional studies suggest that piperine may encourage fat loss fat cell
differentiation attenuation and down-regulation of PPARγ activity.*
● Piperine may also suppress the expression of PPARγ.*

Versatile Dosing
Sparta Nutrition Shred+ allows users to titrate how much energy and thermogenic activity theywant. For those who just need a little boost, one capsule is more than enough. For those looking for all-day energy and weight loss support, two or three capsules is suggested.* 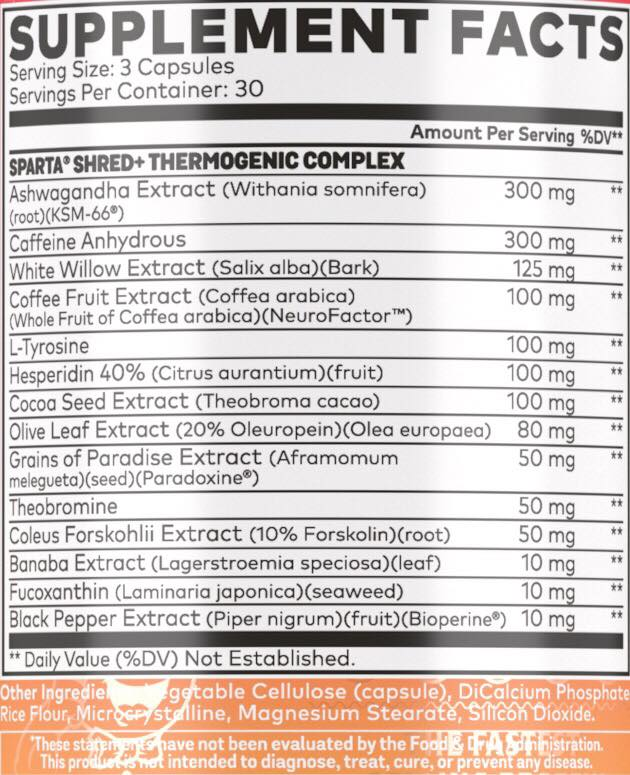