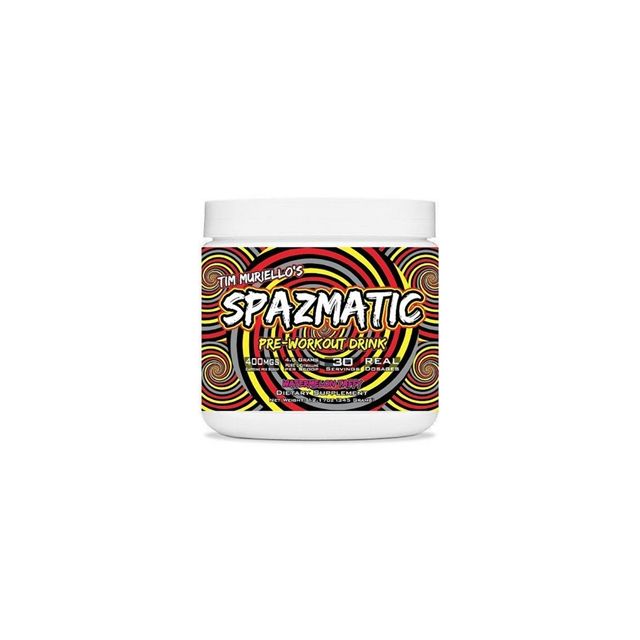 Industry renowned, known and loved, Tim Muriello has long been one of the go to voices on supplementation, product reviews and general information within the supplement industry.

So who better to bring out a product than the man himself?

This means NO CRASH!

And if that hasn’t got you excited already, combining mega doses of performance-enhancing amino acids, alongside vital cofactors for ingredient utilisation, Spazmatic truly maximises its benefits via maximising its ingredients.

You’re about to get SPAZMATIC!

Coming in at the end is higenamine and hordenine, which act via stimulating further adrenaline release, supporting healthier lung function for maximum oxygen uptake in the blood and also finally, blocking the reuptake of key neurotransmitters, which means NO CRASH.

Combining Tyrosine and Huperzine maximises focus via 2 separate methods of action. Tyrosine is a naturally occurring amino acid responsible for the production of adrenaline and dopamine in the brain, which aids in energy and mood enhancement, while Huperzine inhibits the cholinetransferase enzyme, which is responsible for breaking down the neurotransmitters responsible for focus.

L-Citrulline makes up the primary amount of pump products in this formula and rightly so. Supplemental L-Citrulline acts as a precursor to Arginine, which is responsible for increasing vasodilation. As a result, L-Citrulline maximises pumps and has been shown to increase strength, power and anaerobic performance in athletes consuming Citrulline prior to exercise.

Why get pumped up when you can go next level and go spazmatic?